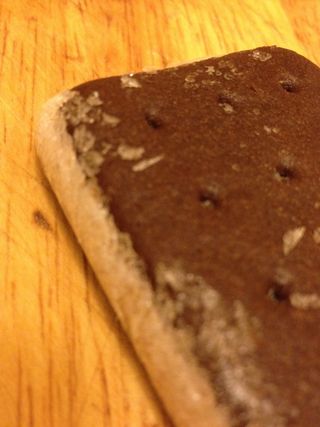 Ice Cream Island was true to its name: It was a shack floating in the middle of a gravel lot between a dentist's office and a vacuum cleaner repair shop. The chocolate-vanilla swirl ice cream cone that spun up out of the roof was visible from half a mile away. It looked like it had been there forever, but probably appeared in the '50s. It had not been painted since.

Santos was not the kind of guy you would expect to own an ice cream stand. He was over 50, had a scruffy face and a gravelly voice, didn't much like kids who were his biggest fans and liked their parents even less. And yet he would turn on the charm for the customers. Kind of. He would lean through the window of the shack to smile face-to-face with the five-year-old stretching up on tippy-toes to tell him what she wanted. He would ignore her parents if they tried to cut in and hurry her up. And if kids in the background got testy, he would shove his whole head through the window and bellow, "No ice cream for rude kids!" And he meant it. The tale was passed down through the years of a boy who flouted the warning and sassed Santos, then felt the breeze of the window being slammed down before him when he reached the front of the line. No one dared test the man again.

Santos saw something in me from the start. The first time Tanya took me there--well the first time I remember—I could tell he liked me, and I could tell this was something special, even though I was too young to have heard the tales. As we stood in line, Tanya blabbed with another mom, bragged about her job and her snooty important clients and described a vacation we were never going to take. I watched the other kids in line. They were not standing quietly. They were not being patient. Their parents were ignoring them, but they were ignoring what the kids were doing wrong. Tanya ignored what I was doing right. I wasn't being good to be good. I was being good because I had no friends to be bad with. And Tanya also did not notice this.

I watched the teenagers dispensing soft serve from machines, ice cream made for a small mouth to eat fast. It is hard to say which was more exciting: the prospect of eating the ice cream or the dream of one day serving it. Was that what Santos saw? A future earnest, hard-working employee? Or did he see what all men saw when they looked at me: a way to get to my mother?

The application and interview process was unlike any I have been through since. I walked up to the window at 10 p.m., and when Santos said, "We just closed, but what can I getcha?" I said "I'd like a job." He stared back at me for a moment, then said, "you want to start now? You can help me close." It was one moment in my life I can point to where I got what I wanted, just for the asking, without having to give something in return.

The comments to this entry are closed.